Update: Having watched the midseason finale, all of the signs of Ricks’s death now make more sense, and they aren’t signaling Rick’s death, but someone else. I’ll give you a hint, if you haven’t seen it yet: lots of people will be really freaking happy.

If you watched last night’s Season 8 premiere of the Walking Dead, you were likely confused by a lot of the back and forth flashback/flashforward that was going on. We see Rick in various states of being, one of which is clearly in some kind of serious distress. This all happened around the scenes of Negan getting his ass handed to him when the combined efforts of Alexandria, The Hilltop, and The Kingdom brought the war to his doorstep.

This episode also showed us that Rick is not going to be around for long. I’ll explain why, but first, let’s rewind a bit. 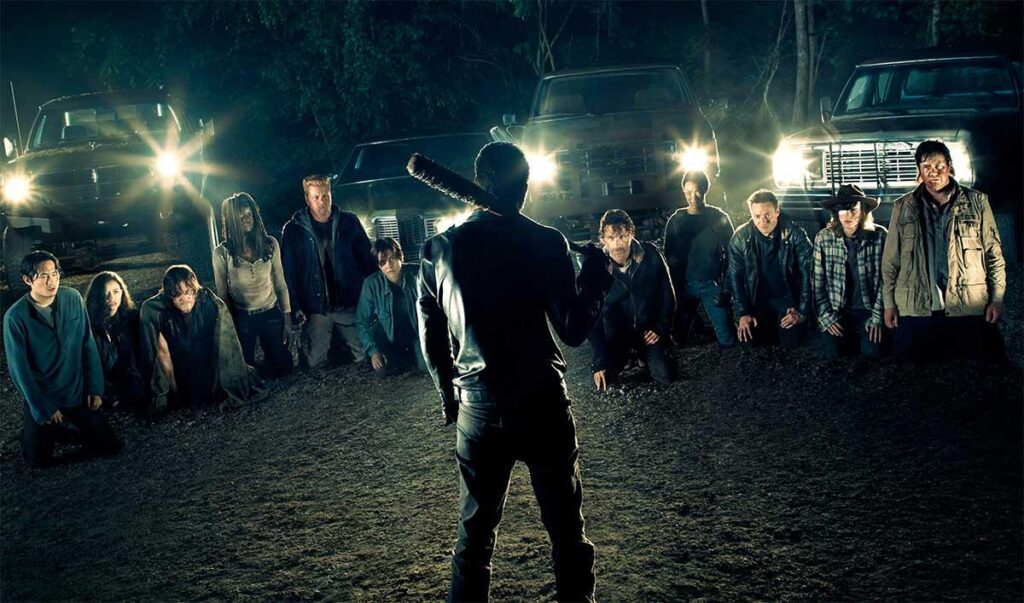 Season 7 of The Walking Dead was probably the most controversial of them all, mostly for really dumb reasons. However, before we get to that, we need to remember what happened in the final episodes of Season 6. The various run-ins with The Saviours showed that Rick was building an enormous stockpile of arrogance. It was getting overwhelming and that is seen very well in his first encounter with Simon. Rick’s tough talk during that first meeting was destined for ruin.

Over the past couple months, I rewatched every episode of each season of The Walking Dead. I do this every year to recap everything from the previous episodes before the new season starts. Getting to Season 6, Episode 16 was like watching a plane take off that you know is destined to crash.

Personally, I didn’t mind the way the episode ended. It was a mega cliffhanger and is something that is pretty common in TV and movies. What would have sucked is if AMC decided to cancel the show after that cliffhanger, much like ABC did with the 2009 remake of V. The majority of the people on the planet have their minds taken over by an alien, characters are killed, and ABC leaves it at that, like the fans wouldn’t mind not knowing what happens next. Terrible. Absolutely terrible.

When Season 7 starts up, we get what we were promised: a very dark episode that sets the stage for the rest of the season. Two major characters are killed in the same episode, both of which were in my prediction post. The Glenn death, as many people know, was straight out of the comic series itself –from the knocked out eyeball to muttering to Maggie with his last breath.

It was pretty horrible, though not a death I would consider the worst in the series.

This episode was hugely significant, and everything that happened needed to happen. That overflowing arrogance was gone. Negan knocked it out of them with every swing of that bat. The growing team of people who had built up a huge strength over the years, overcoming a variety of terrible circumstances to climb up the ladder just got knocked back down to 0.

As the seventh season progressed, we saw each character grow in different ways. Some, such as Rosita, grew into raging buttholes, while others like Enid, stopped being horrible turds. In fact, I now like Enid a hell of a lot more than I like Carl, though that isn’t really saying much considering I like a lot of Negan’s guys more than I like Carl. Still, Enid has stopped her Kristen Stewart impersonation and finally started acting mostly normal.

Meanwhile, Carl continues to be annoying, though not so much in the Season 8 premiere so this may be his turn around. 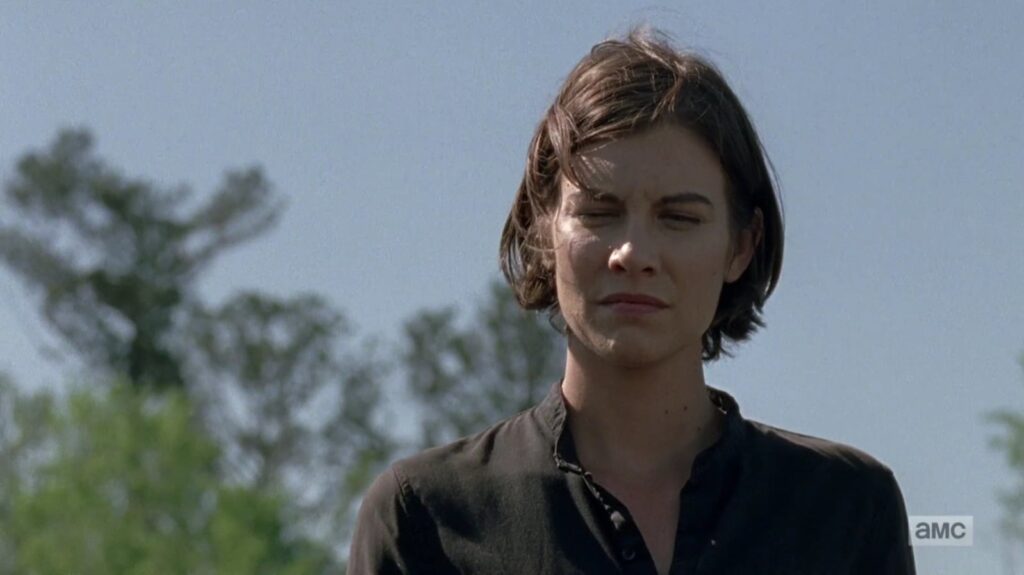 Furthermore, we have seen Maggie grow into one of the strongest characters the show has ever had, and for good reason. She has had to watch everyone she loves in this world get ripped away from her, usually right before her eyes.

Basically, Maggie has had a pretty rough time. It is the foundation that makes her as strong as she is. She’s basically Rick, without being trigger happy and constantly running off on a tangent to fight everything in the vicinity.

Jesus has also started to come out of his shell and is standing up for what he knows is right. No more doing what that idiot Greggory says. He’s pretty much ready to rock with the rest of them.

King Ezekiel is no longer trying to compromise and abide, instead of fighting for the people he knows he must protect. This guy, beyond the weird behavior (which he explains to Carol in Season 7), is very much a promising character to lead if Rick is removed.

Morgan and Carol have both stopped trying to avoid what they know they must do. Both of them are excellently skilled and capable of not just living in, but helping to protect and shape this world.

Aaron is one of my favorite characters. That guy has a great conscience and a lot of will to do the right thing. He also knows what needs to be done to keep those he loves protected. I’m hoping we see more of his character and they allow him to grow further, but I also feel like if Eric gets killed, Aaron may kill himself avenging Erics death. I imagine it as this: Saviour kills Eric so Aaron kills that Saviour and several others in a suicide explosion. At least, that’s what is in my head.

Daryl…well, Daryl hasn’t really changed. He’s the same badass he was in the past several seasons. I had high hopes for Richard, who reminded me a lot of Gerard Butler, but unfortunately, Morgan killed those hopes.

With strong characters like these, it’s easier to transition out your main character. This is exactly what we saw in the Season 8 premiere.

Everyone is cool with Rick being killed

I’ve read numerous interviews and articles over the past few months that signal the death of Rick is coming. Andrew Lincoln is good with his character being killed. Both Robert Kirkman and Scott Gimple have both agreed that the Walking Dead universe can continue without Rick Grimes, though according to the article on Ew, Rober Kirkman said, “I don’t think we have to worry about that any time soon.”

OK, that means it’s happening soon. This show is notorious for swapping around character events, letting some live on much longer than others. By this point in the show, Judith shouldn’t even be alive, Sophia should be, and Rick shouldn’t have a hand.

Lots of things from the source material has been changed for the show. This is intentionally done to provide an enjoyable and surprising experience for fans of the comic. It works well and has managed to keep people guessing for years.

This is also why you can’t believe things they say.

A few weeks ago a photo of Enid showed up. She’s all badass, holding a gun and looking like she might actually use it this time. This image makes me think she’s going to die in this season. Since she first showed up, Enid has been a pretty lousy character. Sure she’s had a lot to deal with, but constantly pulling this angsty teenager crap is was really getting old.

It wasn’t until the final few episodes of Season 7 before Enid stopped being a pain in the ass. She started helping and working to be a more vital member of the group.

And we’ve seen this before.  A character starts coming into their own and BAM! They get ripped to pieces in a revolving door or shot in the eye. We start getting more out of a character and things go horribly wrong for them quickly. They might as well be wearing a red shirt.

In the Season 8 premiere, titled Mercy, they repeatedly reminded us that this is not about Rick. They said it several times. We also saw how Carl is becoming more like Rick used to be, trying to help people while still being cautious. Unfortunately, Rick still wants nothing to do with anyone who he isn’t intimately acquainted with. Everyone is a threat to him and because of that, a lot of people have died. Remember the hiker on the side of the road?

Last year, Michael Rooker predicted the end of the series. His version of the end sees everyone dead except Carl, with the whole show being one giant flashback on Carl’s past. This makes perfect sense and also falls in line with Michonne telling Carl that she’s going to help him protect Alexandria. This is another pretty good indicator of Carl becoming the leader his father once was.

This episode has already started to reposition Carl and set up the preparation for Rick’s ultimate death. We’ve seen multiple timelines in that episode. We have one version where he is standing over a couple graves. We have no idea who they are. We see him with the white beard, looking like Father Time’s great grampa while everyone else hasn’t aged (except Judith by a few years). We’ve had the close-up shots of his eyes being a wreck like he’s sick or has been crying a lot.

We’re seeing the end of Rick, and it won’t be old age.

So what happens if Rick Grimes kicks the bucket

If Rick dies, things will go on. Hopefully, it will be either an epically awesome death or it will be something extremely hilarious. Personally, I’m hoping he gets hit by a bus that no one saw coming. Just running across the street for something and smack! Hit by a tour bus full of old ladies or something. Then run the credits immediately afterward. Don’t show any reactions, just crossing the street, bus hit, credits.

Can you imagine the audience reaction? People would be laughing and freaking out all at the same time.

But seriously, if Rick dies it won’t harm the group. He’s already trying to back away from being their leader. He told Maggie that he’s going to start following her. Things will go on.

So, do you want Rick to die? He’s had quite a few irritating moments through his journey to this point. He is the one people look to but with him out of the way, it will give more power to people who are a bit more level-headed, even if one of them happens to walk around with a Tiger and announce various proclamations in a Shakespearean tongue.

It will be interesting to see how things turn out without our Ricktator, and it looks like it’s coming soon. Then again, maybe it isn’t. After all, they do like to fake out the audience.

Boost Mobile’s “thank you” was to credit the wrong phone